Beyond capitalism?
Toward economic self-determination of communities

Thank -you for your participation!

You can watch the conference here

Don’t miss this amazing gathering of (pro)feminist activist scholars, people active in alternative economic initiatives and folks who believe that a post-capitalist world is possible

A full-day, free conference, open to all who believe a post-capitalist world is possible. We will be showcasing:

(1) the Community Economies project, which seeks to contribute to the emergence of a political economy that is focused on practices of economic self-determination, on the idea that “another world is possible”, and that is dedicated to post-capitalist futures;

(2) economic initiatives from across the territories of Turtle Island today referred to as Quebec. These initiatives have in common their foundation on radical critiques of the values and operation of the capitalist economy. They have as their objective the creation of new types of relationships—economic, social, and political—and share a special focus on the values and ethics that underlie our interdependence with each other and with nature;

(3) the community economy at Concordia University and beyond that will be producing the event: from the student-run food groups, to the childcare collective, to the alternative media.

To figure out how our alternative economic initiatives contribute to post-capitalist presents and futures. To share knowledge and skills. To get to know each other and consolidate our networks. To feed a participatory action-research project of community economies in the making.

People involved in economic initiatives:
Consult our program and the communities economies map to know more about them!

And all other folks who believe that a post-capitalist world is possible! 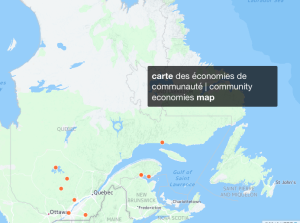